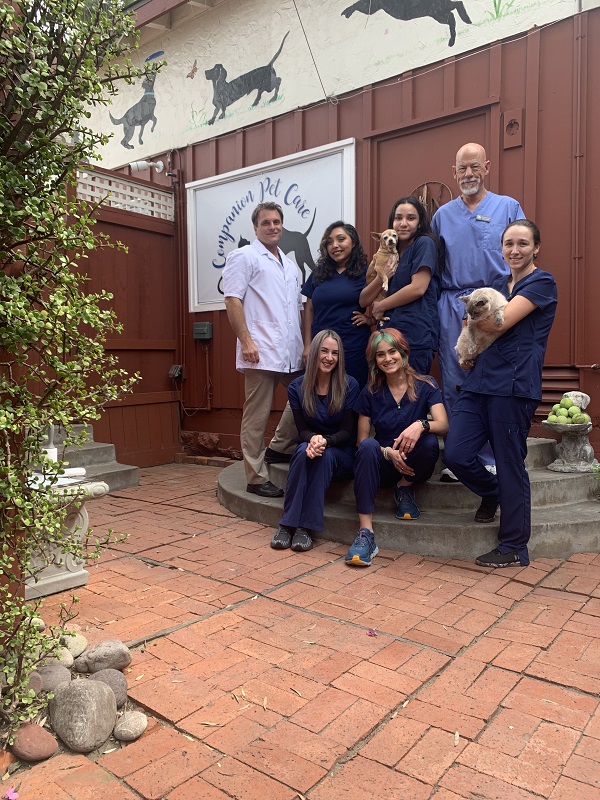 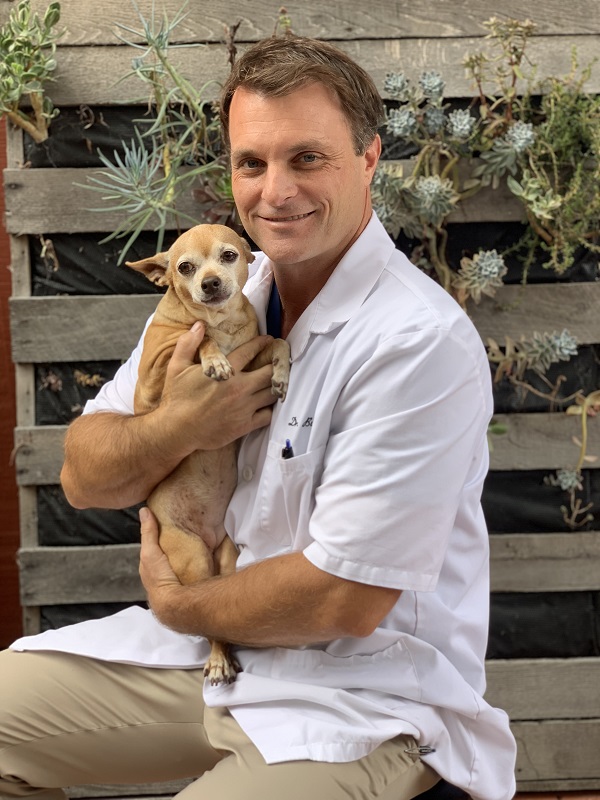 Dr. Ted Burghardt was born and raised in Denver, CO. As an outdoor enthusiast he always appreciated nature and animals. From a young age, he knew he wanted to be a veterinarian. He graduated from the University of San Diego with a Bachelor’s degree in Biochemistry. One of his draws to San Diego was the great weather and ability to play tennis outside year-round. He was a starter for the USD Toreros men’s tennis team for his four years there, traveling and competing at the Division 1 level.

After college, he worked at Scripps Research Institute in the Immunology department for 2 years. He took a break for 6 weeks to travel to Australia and volunteer at the Australia Zoo in Brisbane, where he was fortunate enough to meet Steve Irwin on a couple of occasions and watch him perform with his beloved crocs.

He then went to work for a small animal practice in Las Vegas, NV. He learned some advanced surgical procedures there, including multiple knee and hip orthopedic surgeries, laparoscopic spays and biopsies, and other abdominal, ocular, and cutaneous soft tissue surgeries. As the second veterinarian hired on at his first veterinary job, he played a role in growing the practice to 5 veterinarians before he left in 2013. Looking to move back to the city he is most passionate about, he found a fantastic job opportunity at a 24-hour emergency clinic in San Diego.

At the 24-hour emergency Mission Animal and Bird Hospital in Oceanside, Dr. Burghardt was one of the emergency doctors attending to trauma, surgery, internal medicine, and a variety of other emergent cases. His long-term goal was always to become the owner of a veterinary hospital. After much diligence, he found Companion Pet Care and is ecstatic to be part of this amazing team. With the support of Dr. Gerry Soifer and Dr. Nancy Bushnell, he was fortunate to be accepted as the buyer of the clinic. The opportunity to be involved with such an established, beautiful, historic veterinary clinic is rare and highly sought after, and Dr. Burghardt is incredibly grateful for the opportunity.

Dr. B wants to continue to add on to the high-quality services offered at CPC. He has always been fond of orthopedic surgery, and after specialist training, the doctors at CPC are now proud to offer cruciate (ACL) repair surgery for all size dogs, and cats. Specifically, providing the TTA procedure for medium and larger dogs has become a passion. Dr. B also feels strongly that with the included PRP treatment during the surgery, and rehabilitation sessions starting one week after surgery, that all the elements for a comfortable, successful recovery and return to function are in place. 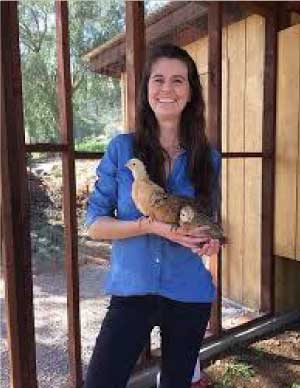 Dr. Meghan Landen-Fowler grew up in Omaha, Nebraska in a family full of pets of all sizes, from hamsters to dogs to horses.
Her ambition to become a veterinarian started at a young age when the family vet, also a family friend, promised her a job at his clinic as soon as she could drive. He made good on that promise, and she worked with him all through high school and college. During that time, she learned about small-animal patient care and solidifying her desire to become a veterinarian herself.

She graduated from the University of Nebraska-Lincoln with a bachelor’s degree in veterinary science, from Kansas State University with a doctorate in veterinary medicine and earned her certificate in veterinary medical acupuncture from Cura Core in Fort Collins, Colorado.
She completed her small-animal internship at the VCA Emergency Animal Hospital and Referral Center here in San Diego, in 2005 and has since been practicing in San Diego North County.
She enjoys time with her husband and daughter, their two dogs, chickens, and Western Pleasure horseback riding. She looks forward to meeting you and your pets and answering questions you might have regarding how integrative medicine might help their health. 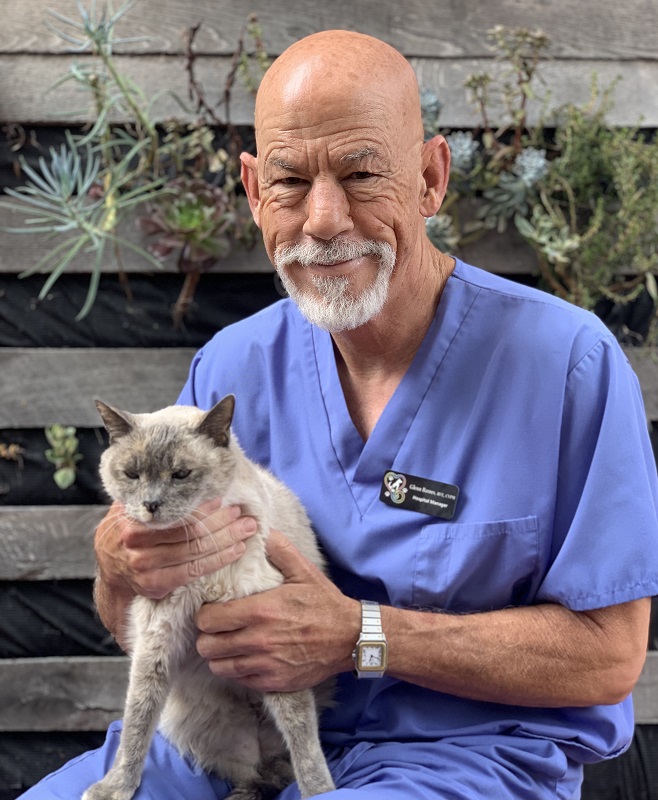 Glenn Barnes is the newest member of the family here at Companion Pet Care. He has spent about forty-five years of his life in small animal hospitals, and began his career by cleaning cages at 6:00 every morning. From there, Glenn learned so much over the years and eventually became a Registered Veterinary Technician (RVT) in 1979 at an animal hospital in El Cajon. He then moved with his family to Orange County and expanded his skills by working at a busy emergency clinic. All of this landed him a wonderful position at Mission Animal and Bird Hospital in Oceanside, where he was able to expand his knowledge even more, caring for exotic animals as well. Soon he was promoted to Hospital Manager and aided greatly in growing the hospital to a twenty-four-hour facility with fourteen doctors – fives times the size it was when he started.

At forty-five years old, he went back to college to keep up with the ever-growing practice and became a Certified Veterinary Practice Manager (CVPM), becoming part of only a handful with that combination of medical and business knowledge in the animal profession. 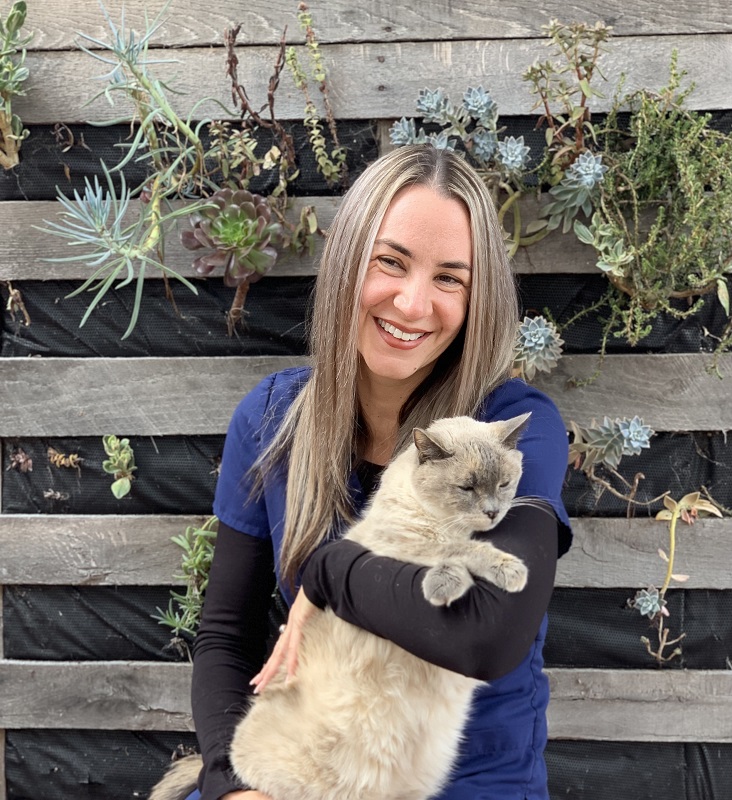 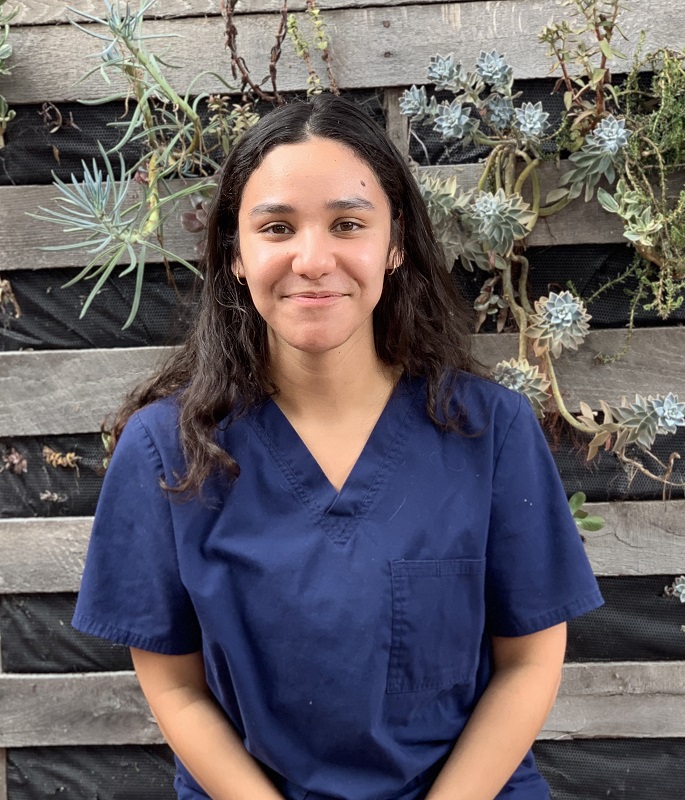 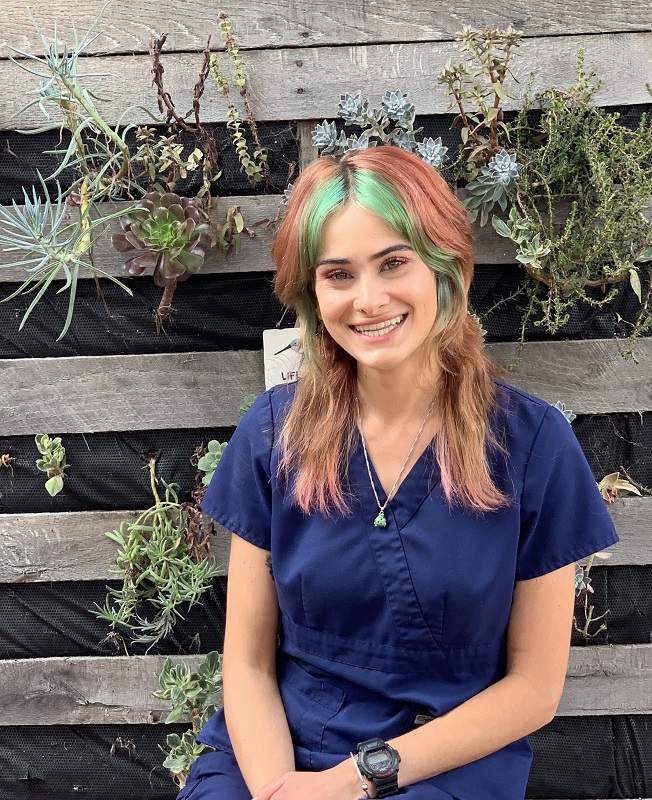 Water moccasins, crocodiles, hemlock, nightshade, and… Alexi? As a product of Florida’s wild biological frontier, Alexi thinks in alligators and wishes Davy Crockett was still around so she could teach him some proper bear-grinning technique. Though one foot remains planted firmly in the untamed wilderness of her humble origins, she is gaining confidence in the relative torpor of Encinitas, California. Her new climate may be less humid, but her life is no less saturated. Hiking, visual art, volleyball, camping, traveling – all of these while basking in the warm ambiance of highly caffeinated beverages and true crime podcasts.

Her indefatigable canine companions Samwise the Brave, Koda, and Winona (Ryder) are all in perpetual awe of Alexi’s magic ability to open doors and conjure up their meals. Though their collective grasp on theoretical physics is tenuous at best, all three dogs love reading Tolkien. Alexi’s aspirations include obtaining conclusive evidence for extraterrestrial influence on ancient Egyptian architecture, as well as one day maintaining her own clinic for animal rehabilitation and physical therapy. 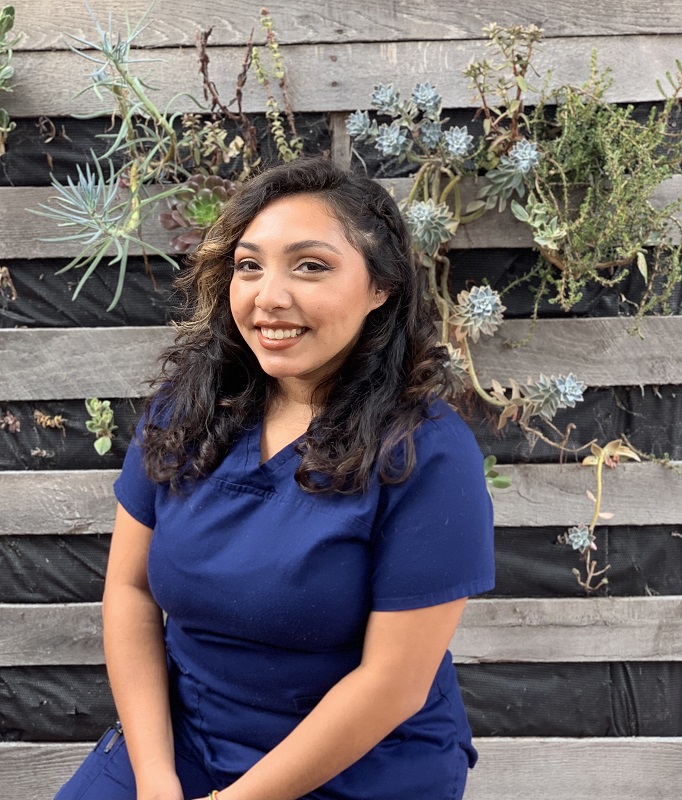 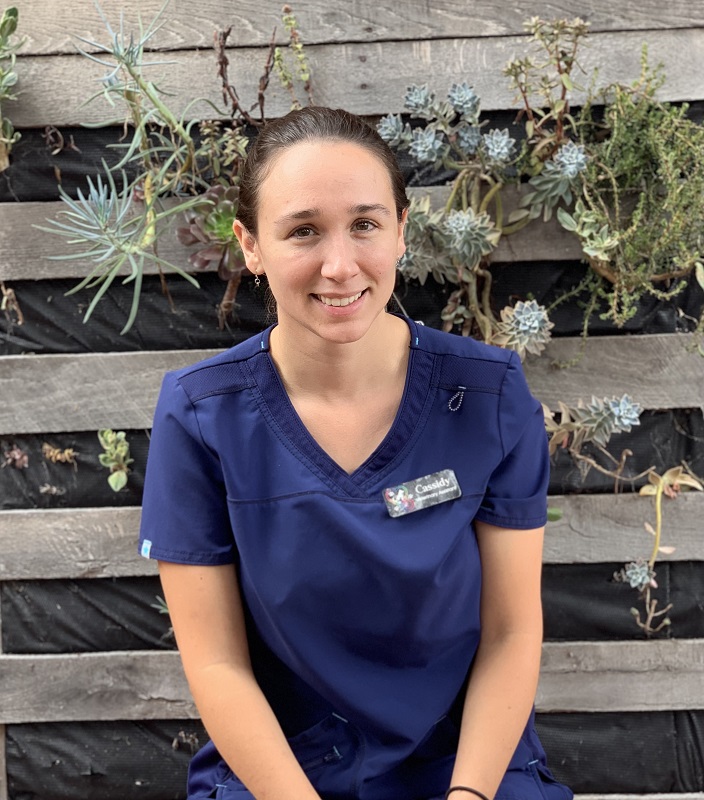 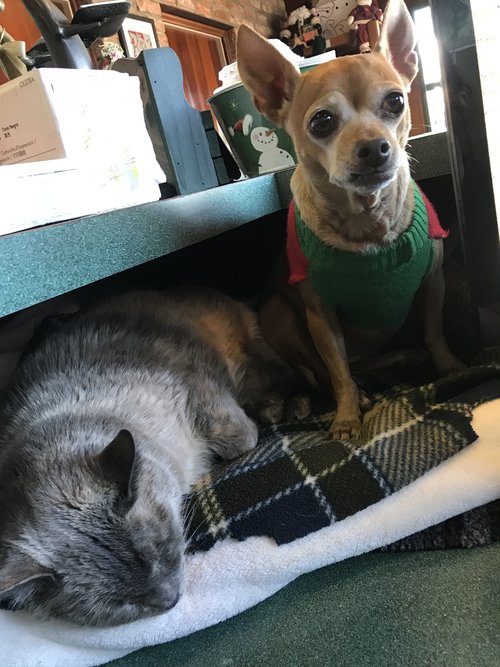 We rescued Luli 5 years ago and quickly became one of our beloved family members. You can find her upfront at the desk ready to greet you with kisses. Luli loves afternoon naps and lots of TREATS!

Nugget the chihuahua
Nugget was rescued by Dr. Ted Burghardt 7 years ago in Las Vegas. She loves to take naps with her best friend Luli and can often be found sneaking treats around the clinic! She may act “tough” when she comes to greet you at the door, but Nugget is the biggest love, and would love to lounge with you in the sunshine.

Font Resize
Contrast
Accessibility by WAH
Call Us Text Us